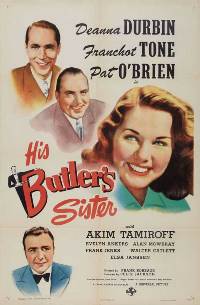 The plots of most of the adult Deanna Durbin movies are essentially the same. Girl meets boy. Girl wins over boy with irrepressible charm and dynamic singing ability. His Butler’s Sister is no different. If viewers want edgy, groundbreaking, innovative cinema, well, they wouldn’t be watching Deanna Durbin movies in the first place.

This movie is somewhat better than the body of her films due to ability of her supporting cast and the stylish direction by Frank Borzage. The “boy” in this case is composer Charles Gerard (Franchot Tone). Tone was seventeen years older than Durbin and had played a character who was the subject of her character’s inappropriate crush in Nice Girl? But, now, apparently, she was deemed old enough at 21 for him to be her love interest.

The age difference between Durbin and Tone does not present a stumbling block for the movie. The two work well together and would go on to make a third film together, Because of Him, three years later. Tone was always an underappreciated talent in Hollywood. While he never had leading man charisma, he presented an innate intelligence and was always able to make an intriguing second lead. Furthermore, he had the ability to play opposite Hollywood’s most dramatic and magnetic leading ladies without appearing as a pushover or a nonentity, on the one hand, or stealing focus, on the other. And that is the skill that serves him here. Durbin is clearly the star of the film, and Tone knows how to match her strength while remaining firmly in her shadow.

Durbin’s Ann Carter plays like most of her characters—kind and gentle on the surface, but with a strong will and deep sense of what’s right and fair. This character reminds me of Jane Austen’s Fanny Price (Mansfield Park) in her stalwart moral code. But unlike Fanny, Ann gets to shine. Durbin brings an engaging sparkle to the role, which is never more powerful than when she sings. This film has two big showstoppers, a medley of Russian folk songs that wins the heart of Charles, and the spectacular finale of Puccini’s “Nessun Dorma” (sung in English) from Turandot.

Between Ann and Charles stands the butler, Martin Murphy (Pat O’Brien), Ann’s much older half-brother. Martin provides most of the complications that keep Ann and Charles apart for 89 minutes, but he is never malicious. He thinks he is doing right by his employer and his little sister. As is typical of Durbin films, even the antagonists aren’t bad people. They’re just misguided.

The rest of the cast is filled with a who’s who of classic Hollywood character actors, including Akim Tamiroff, Alan Mowbray, Walter Catlett, Evelyn Ankers, Frank Jenks, Sig Arno, Hans Conried, Florence Bates, and Roscoe Karns. Even if the names aren’t familiar, classic film fans will recognize their faces. If there’s a problem with this wealth of talent, it’s that the individual performers do not have enough screen time.

What elevates this film is the lush, romantic direction by two-time Academy Award winner (7th Heaven and Bad Girl) Frank Borzage. The film glows with a soft, glimmering sheen. Borzage has a way of photographing faces that creates an emotional connection, not just between characters, but with the audience. He manages to show Ann blossoming from a peppy kid to a beautiful woman over the course of the film—credit there does have to be shared with the costume and make-up departments, as well.

His Butler’s Sister is one of the Durbin movies that have yet to be officially released in the U.S. on DVD. Like History Is Made at Night, another romantic Borzage classic, it is available as a Brazilian import. Universal needs to make more of her films available on DVD; after all, it was Durbin who single-handedly saved the studio from bankruptcy. It owes her.

2 comments on “His Butler’s Sister; Review by Robin Franson Pruter”