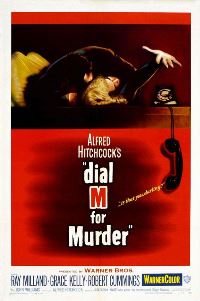 Tense thriller about a man’s scheme to murder his wife.

That stage plays must be “opened up” in their adaptation for film is often taken to be axiomatic. The theater and the cinema are different media and, thus, involve different techniques of storytelling. The most salient difference is the ability of film to incorporate multiple and various environments while stage plays are limited to a couple of rooms or sets. Adaptation, then, most often involves “opening up” the play to include more environments of action. Failure to open up the action usually results in the film being uncinematic and tedious.

However, while most of the action of Dial ‘M’ for Murder, which is based on the hit play by Frederick Knott, takes place in a single room, it never seems plodding or monotonous. In fact, viewers often become so engrossed in the story that they fail to realize that much of the movie involves a single set until after it’s over. Despite the lack of change in scenery and the long, talky scenes that make up the action, Dial ‘M’ for Murder seems like a film and not like a stage play put on screen.

The reason that Alfred Hitchcock is considered one of the greatest directors of all time is his seemingly innate understanding of cinema. He knows how to use the camera, the mise en scene, and montage in a way that’s natural to the medium.

One of the most interesting aspects of the mise en scene here, the placing of objects (such as bottles or bedframes) in front of characters, develops from the film’s peculiar production history. When Dial ‘M’ for Murder was filmed, 3-D movies were popular, leading to the movie being shot in 3-D. However, by the time the film was set to be released, the popularity of the technique had waned. Therefore, the movie was released only in a 2-D version. Nevertheless, the shots with foreground objects, which were designed to create depth in the 3-D image, remained. Even in 2-D, this use of the foreground prevents the presentation of the action from being similar to the view within a stage proscenium arch. Hitchcock further uses dynamic shots to exploit the 3-D technique that, even without that effect, keep the film from looking stagey.

Theatrical productions rely more heavily on the strength of the performances than films do. In this aspect, Dial ‘M’ for Murder shows its theatrical origins. The five main performances are crucial to the film’s success. The standout of the film is Ray Milland as Tony Wendice, a charming, urbane man who has devised the perfect murder of his unfaithful wife. Despite winning an Oscar for The Lost Weekend (1945), Milland remained a second-tier, both in popularity and ability, leading man in his younger days. In middle age, however, he reached new heights of achievement as an actor. In this film and the one that came after, The Girl in the Red Velvet Swing, he gives two outstanding performances. He seems fully in control of his instrument, as those the acting community call it. Every movement is perfect. No gesture is too big or too small. Every slight change in expression is meaningful without being overt. He’s so darn engaging that we almost identify with him despite his dastardly plot to do away with his wife.

Grace Kelly, as Margot Wendice, makes her first appearance in a Hitchcock film. She would follow it up with two more, Rear Window and To Catch a Thief. Much has been said about Hitchcock’s preference for blondes who appear cool and sophisticated on the outside but suggest an internal passionate nature. Kelly is the apotheosis of the Hitchcock blonde, the perfect realization of this figure. Kelly seems to embody the character of Margot. She seems to be naturally her, so much so that it’s hard to remember that she’s acting.

Robert Cummings as Mark Halliday, Margot’s lover, too seems natural. However, the persona he projects is wrong for the character. Nothing about Halliday, or Cummings, seems like it would inspire illicit passion. Even when he unwittingly figures out the murder plot, he doesn’t seem like he has enough intelligence to do so. Halliday needs to be played by someone more dashing and less blandly affable.

The final performances come courtesy of two British character actors, Anthony Dawson and John Williams. Dawson plays the disreputable former schoolmate of Tony Wendice who gets pulled into his murder scheme. Dawson is aided by his gaunt, swarthy appearance—he looks seedy. Throughout his long scene in the first act, he shows subtle indications of growing awareness that Tony has trapped him into participating in his plan. Williams, a frequent Hitchcock collaborator, plays Chief Inspector Hubbard. Hubbard has the least personal stake in the outcome of the case and remains static throughout the film. Yet, Williams imbues him with a sense of deep intelligence, as his character becomes the prime instigator of the story, taking over that role from Tony.

Hitchcock’s next film would be Rear Window, and that film is such a masterpiece that Dial ‘M’ for Murder often seems slight in comparison or it comes off as a kind of rehearsal or preshow with to the main event. Like Rear Window, Dial ‘M’ for Murder takes place in a confined space (as do two of Hitchcock’s films from the 1940s, Lifeboat and Rope), and Dial ‘M’ provides the first collaboration between Kelly and Hitchcock. Yet, the films look different (Rear Window is noted for its giant, busy set, while the set of Dial ‘M’ is plain and almost claustrophobic) and feel different.

Rear Window seems more dramatic and immediate than the aloof and subtle Dial ‘M’. The polished veneer mutes the tension of the latter film, making it far more congested and uncomfortable than Rear Window. While Rear Window ends with a scene of dramatic violence giving the audience a catharsis for the tension created in the film, Dial ‘M’ for Murder lacks that cleansing climax. The most violent scene in the film (and it’s shockingly violent for the time) happens halfway through, yet the tension can’t be released because the menace to Margot only begins with this violent scene. It builds up through the second half. The underlying tension is never resolved in a way that’s truly satisfying. Even the characters fail to find a release of emotion. Yet, this lack of satisfaction at the end is not so much a flaw in the film but a deliberate choice. But, perhaps, this frustration accounts for why Dial ‘M’ for Murder is not appreciated among Hitchcock’s top films.

Like most of Hitchcock’s films, Dial ‘M’ for Murder holds up for repeat viewings. For students of film, the design of the shots is instructive in learning the nature of cinematic technique. For casual viewers, the rich, human drama is deep enough to provide new revelations upon each subsequent viewing. 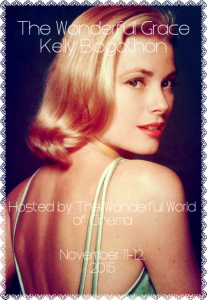