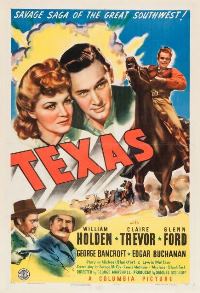 Breezy western about two friends, a rancher and rustler, fighting for the affections of young woman.

William Holden appeared in a number of outstanding, all-time classic films, including one that would make my list of top five movies of all time (Sunset Blvd.). Texas is not one of those films. In fact, it’s a standard western from the time. The story is a truncated retread of one that was done better and often in the past. The film, however, plays better than it should thanks to brisk pace and strong performances.

Dan (William Holden) and Tod (Glenn Ford) are best friends. Through a misunderstanding, they get separated and end up on opposite sides of the law. In post-Civil War Texas, Tod becomes a cattle rancher while Dan joins a gang of rustlers. Not surprisingly (if you’re familiar with classic movies), they fall in love with the same woman, the spunky daughter of a rancher, who bears the decidedly unfeminine name Mike (Claire Trevor). Tod carries on a serious, if timid courtship, and loses Mike’s affections to the more direct and exciting bad boy, Dan.

The film doesn’t develop the character of Mike enough for us to know why she prefers Dan, besides the obvious–Holden has an undeniable (and nearly unparalleled in the history of film) sex appeal that would continue throughout his career, something that Ford never had. Claire Trevor is miscast in the role. Mike needs a more exuberant, less thoughtful actress and, frankly, someone younger. At 31, Trevor was too old to play the ingénue opposite 23-year-old Holden and 25-year-old Ford. A better choice would have been Columbia contract player Rita Hayworth who in 1941 was just poised to break through to major stardom. She had the kind of sparking presence needed for the role. And she had strong chemistry with Ford, her costar in five films, most notably Gilda. Surprisingly, despite their being at the same studio for a decade, Hayworth and Holden never worked together, but it would have been an interesting pairing to see.

The foundation of the film is the relationship between Dan and Tod, and lifelong friends Holden and Ford bring their off-screen chemistry to the film. Both characters show great respect for each other throughout the movie, and Tod is refreshingly not moralistic about Dan’s life choices. Texas benefits from the star charisma of the duo. Even though both were at the start of their careers, the film shows that they, particularly Holden, had something special. A film this mundane would never attract major stars, but it ended up with two before their names had marquee value. Holden doesn’t have the lines that would define his face at the height of his career, but he shows a hint of the world-weariness that characterizes the best of his performances. Ford is looser, freer, and more fun-loving than he would be in his years of major success, suggesting that he could have fared well with lighter material than his most famous films offered him.

If the friendship between the two main characters is the foundation of the film, then the supporting performance by Edgar Buchanan as the town dentist is the showy façade. Buchanan steals every scene he’s in, helping to elevate the film beyond the run-of-the-mill. He gives Laird Cregar in I Wake Up Screaming a run for his money for the best supporting actor performance of the year. Donald Crisp won the Oscar in that category for How Green Was My Valley, but his performance is nowhere near as compelling as Buchanan’s and Cregar’s. (Trivia: Buchanan was a dentist before turning to acting, and he often plied this trade on set, as he did with Ford, with whom he appeared in 13 movies.)

The film gallops by (except for an overly long boxing scene near the beginning) with short dialogue scenes punctuated by fun action sequences. Director George Marshall (Destry Rides Again, The Blue Dahlia) keeps the movie puffing like a racehorse. For the most part, this is good. The conflict is simple. It doesn’t need lengthy exposition. The action sequences end before they become stale—something modern films should take note of. What the film lacks, however, is development of the Mike role and the romances. The film’s short length means there was time to put those elements in, but, unfortunately, that didn’t happen.

Texas is not iconic, majestic, epic, or thematically profound like the great Hollywood westerns. It is, however, an enjoyable 93 minutes that shows two major stars in their apprenticeship years. 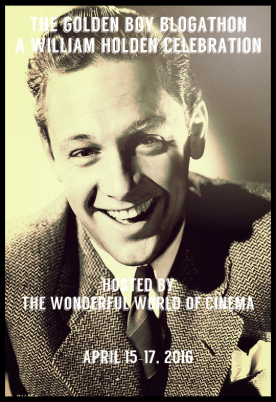 ← Evil Under the Sun (1982); Review by Robin Franson Pruter
The Disability in Film Blogathon Is Finally Here →