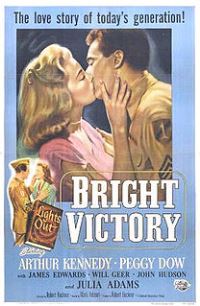 Forgotten drama about a returning soldier facing life as a newly blind man.

After World War II, Hollywood delivered a number of thoughtful films about veterans returning from the war with life-changing injuries. The best known of these is probably The Best Years of Our Lives, which garnered two Oscars (Best Supporting Actor and an honorary Oscar for giving hope to returning veterans) for Harold Russell, a real-life double amputee veteran. Bright Victory is a lesser-known film from this cycle about an Army sergeant who is blinded after being shot in the head. The role earned the great character actor Arthur Kennedy his only Oscar nomination for Best Actor (his other four nominations were for Best Supporting Actor). Although he lost the Academy Award to Humphrey Bogart (The African Queen), he did win the New York Critics Circle Award.

Kennedy’s performance as Sgt. Larry Nevins is key to the film’s success. Kennedy specialized in characters who are cynical and unsympathetic. He brings those qualities to this film. While Nevins is bitter due to his injury, the film doesn’t focus on that. Too many films feature characters embittered by disability. Here, more interestingly, Nevins is presented as a character who is not a particularly likable guy even without his blindness. We’re only shown one brief scene of Nevins before he is shot, as he drives a jeep into combat with two companions (one of whom you might recognize as a pre-stardom Rock Hudson). He brags to them that he has a girlfriend with a rich daddy who can set him up with a cushy job.

Even after Nevins is injured, he continues to do things that frustrate the audience’s desire to feel sympathetic to the protagonist and to a character with a disability. The film’s most startling moment comes when Nevins, having befriended fellow blind soldier Joe Morgan (James Edwards) in the rehabilitation hospital, wonders whether a new group of soldiers scheduled to arrive will contain any “n*****s.” Hearing that word at a time when film language was sanitized by the Production Code (when even “pregnant” was taboo) is shocking. Giving such hateful language to the protagonist, who is not merely a stereotypical stock character, is a bold move by the filmmakers.  The casual way that Kennedy delivers it makes the moment all the more disquieting.

Morgan, a black man, is hurt to discover his friend’s racist attitude. Edwards was a pioneer in playing dignified black characters of the type that, a few years later, Sidney Poitier would become identified with. Long before A Patch of Blue, Bright Victory presented the notion that blindness creates the ability to see beyond race. That idea seems hopelessly naïve now, but, at the time, it was revolutionary. Regrettably, the film doesn’t know how to resolve the conflict between Nevins and Morgan in any meaningful way. It merely shows Morgan accepting an olive branch of friendship from a repentant Nevins after Morgan disappears from the movie for most of the second half.

If the movie is forward-looking in regards to its presentation of race, the same cannot be said for its presentation of women. The film promotes the idea that women are the necessary helpmates of man and that their purpose is to stand behind a man and support him as he makes his way in the world. The film presents Nevins with a choice between Chris (Julie Adams, billed as “Julia Adams”), his girl back home in Florida, and Judy (Peggy Dow), a sympathetic woman who spends time with the soldiers at the hospital. Judy is almost too good to be true. She’s kind, understanding, beautiful, and intelligent. Why she finds Nevins appealing is a mystery. Dow is wonderful in the role, making me think that she could have had a great career if she hadn’t retired to raise a family shortly after this film was made. The film in a pleasant surprise makes Chris a sympathetic character too. She’s determined to stick by Nevins even though his future has been irreparably altered. There’s a subtly to her role that wasn’t typical to films of the era, which often present characters in binary terms.

The film features a number of recognizable actors in supporting roles. A pre-stardom Richard Egan appears as one of the blind soldiers at the rehabilitation hospital, eight years before his character would cuckold Kennedy’s in A Summer Place. Jim Backus plays Judy’s brother-in-law, who encourages Nevins to explore the possibilities still available to him in life. And Will Geer gives a thoughtful performance as Nevins’s father. He is believable in the role despite being only 12 years older than Kennedy. Unfortunately, Geer’s characterization highlights the artifice of Nana Bryant’s performance as Nevins’s silly mother—another instance of the film’s sexism, presenting the mother as thoughtless and emotional while the father is considerate and reasonable.

The movie struggles with presenting a character who grows as a person over the course of the film without it falling into the cliché of showing disability as redemptive. If it doesn’t fully manage to avoid that pitfall, Kennedy’s performance helps make the character’s positive development seem more realistic. Kennedy never makes Nevins appear as a saint. Even at the end, we get a sense that Nevins is a work in progress, someone who is still flawed and who still has a lot growth yet to do. In this way, Nevins seems far more like a flesh-and-blood person than a disabled paragon.

Bright Victory is an ambitious, if flawed, film. It still can be applauded for being ahead of its time in its mature confrontation of social issues. Buoyed by strong performances and a surprisingly restrained direction from melodrama master Mark Robson, it is a shamefully overlooked item (never having been released on home video or streaming) in the history of films dealing with disability and those dealing with race.

← The Disability in Film Blogathon Is Finally Here
State of the Union; Review by Robin Franson Pruter →